The illuminated stacks of SteamPlant Square

Summer fun in the clear-blue waters of the Spokane River

Flowers blooming on a sunny day in Riverfront Park

View of Monroe Street Bridge and downtown Spokane beyond

Because Spokane is considered the “downtown” of a region that includes three U.S. states (Washington, Idaho and Oregon) and two Canadian provinces (Alberta and British Columbia), the city caters to a variety of travelers. People visit during all four seasons for an exciting array of shopping, dining and entertainment opportunities in addition to a more relaxed pace pursuing Spokane’s serene outdoors.

The jewel of downtown Spokane is the 40-hectare Riverfront Park. Hop on the SkyRide for a 15-minute tour of the two Spokane Falls and attractions left behind from the 1974 World’s Fair. View sculptures, ride a carousel and pay tribute at the Vietnam Memorial. At Manito Park, use bike and walking paths to see picturesque gardens, a greenhouse conservatory and duck pond. Head to nearby Nine Mile Falls to visit Riverside State Park, the largest state park in Washington, where you can picnic, swim, camp, hike, fish, boat, ski and snowmobile on nearly 5,700 hectares along the Spokane and Little Spokane rivers. Venture onto the Centennial Trail, a 64-kilometer paved trail stretching from Nine Mile Falls to the Idaho state border; the center section runs through Riverfront Park.

Admire the surroundings as much as the performers on stage at the Martin Woldson Theater at The Fox, which occupies a 1931 art deco movie theater building. Northern Quest Resort is known for its hotel, nightlife and shows by big-name entertainers. The restored Historic Davenport Hotel, a National Register of Historic Places site that was built in 1914, was the first U.S. hotel with air conditioning; the Crab Louis Salad was named after its first proprietor, Louis Davenport. Nearby are the Bing Crosby Theatre, Northwest Museum of Arts & Culture and Spokane Arena.

Spokane prides itself on its culinary scene with top-notch chefs, seasonal cuisine and drinks matched with innovative meals. After operating as a steam plant for nearly 70 years, SteamPlant now features retail shopping, a restaurant and brewery, one of 41 craft breweries on the Inland Northwest Ale Trail. Arbor Crest Wine Cellars hosts concerts and wine-related events on its 1924 estate grounds 137 meters above the Spokane River. Consider a trip to Green Bluff, a cooperative of more than 40 family farms that feature you-pick fruit.

"Spokane" means "children of the sun" – from the Salish language of the Spokane Native American Tribe.

Think the Pacific Northwest has a gloomy reputation? Think again: Spokane sees an average of 260 days of sunshine a year.

Inside the Walter Clore Wine and Culinary Center

A Close-Up Look at Leavenworth, Washington

3 Parks, 5 Days: Be Wowed by Washington

From Farm to Glass in the Yakima Valley

On the Rails: Explore Glacier National Park by Train

6 Affordable Places to Stay in the U.S. Great Outdoors 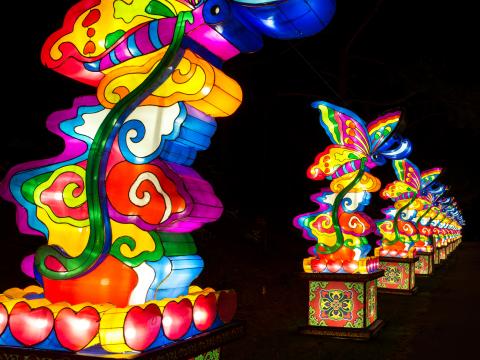