Sunset over the charming Main Street in Old Town Newhall, a popular arts and entertainment district

All dressed up for the Santa Clarita Cowboy Festival, held annually in William S. Hart Park

Cycling on the Iron Horse Trailhead, home to a historic railroad trestle bridge

Discover a blend of historic charm, outdoor adventure and adrenaline-pumping thrills only 48 kilometers north of Los Angeles in Santa Clarita, California. Feel the rush of a roller coaster at Six Flags Magic Mountain, immerse yourself in Hollywood’s history and escape into the breathtaking beauty of the Santa Clarita Valley.

With more than 10 movie ranches and 30 sound stages (spaces dedicated to the creation of film productions), Santa Clarita’s filmmaking reputation is impressive. Melody Ranch Motion Picture Studio has been in operation since 1915 and is best known for its western hits featuring Gary Cooper and John Wayne. The studio is now the main filming location for HBO’s critically acclaimed “Westworld.” Many television shows are filmed within the city, so keep your eyes peeled for celebrities and camera crews hard at work.

Next door sits Hurricane Harbor water park, which allows for more fun in the California sun. Exhilarating twists and turns will test your courage on the Black Snake Summit, while the Python Plunge slides are the perfect introduction for those working up the courage to try the water park’s more thrilling speed slides. For the kids, Castaway Cove and Splash Island provide a world of entertainment. From the kid-friendly slides to cascading waterfalls, it’s a great way for children to play while mom and dad relax in the adjacent lounge area.

With numerous trails and awe-inspiring vistas, the city is a haven for nature enthusiasts. Venture into the picturesque Towsley Canyon for stunning views of the entire valley. Or, hike Vasquez Rocks, and bring a camera to snap photos of the impressive formations. For water activities, a detour to Castaic Lake is a must. Kayak across the glass-like surface, fish on the banks of the reservoir or cool off with a relaxing swim.

Looking for an afternoon picnic spot? Head to Whitney Canyon Park and dine beneath the shade of a towering oak. After lunch, take a stroll on the banks of the creek and hike to a small waterfall. A pit stop to The Gentle Barn is a real treat for animal lovers. Visitors can interact with rescue animals such as horses, donkeys, pigs and even an emu. For something a little off the beaten path, visit Mentryville, an 1880s oil boom town and California State Historical Landmark. Its oil well, Pico No. 4, was the longest continually operating oil well in the world until it closed in 1990. Today, you can see some of the town's historic buildings including oil driller Charles Mentry’s mansion, a one-room school house and a period barn.

Built in 1912 by the Philadelphia Toboggan Company, the Grand Carousel is the oldest attraction at Six Flags Magic Mountain.

The historic Saugus Train Station has been featured in numerous Hollywood productions, including "The Pilgrim" with Charlie Chaplin and "The Grifters" starring Angelica Huston and John Cusack.

On March 9, 1842, Francisco López made California's first gold discovery in Santa Clarita. Today, the historic site is known as the "Oak of the Golden Dream."

A Cultural Getaway to Pasadena, California 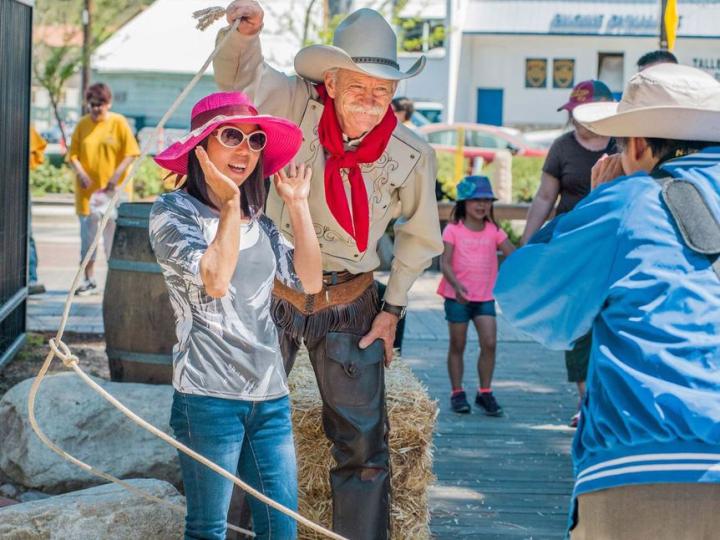 Concerts in the Park

Six Flags Holiday in the Park