The balanced and airy interior of Laurent House

Aiming for the green from the fairway at Aldeen Golf Club

Packed house for a concert at the Coronado Performing Arts Center

Watching the Head of the Rock Regatta in the Rock River

A city of gardens, rivers and golf

Rockford sits in the heart of the USA, only a 90-minute drive from Chicago. Here, a variety of experiences await: Dine on the dock at the Prairie Street Brewing Co., get 18 holes in at Aldeen Golf Club (“Golf Digest” called it a “Place to Play”), watch an ice hockey or baseball game, or explore one of 42 forest preserves. Wander through the Rockford City Market to enjoy food trucks, beer tents and live music. Visit Rockford on a drive through the Great Lakes region, as a stopover on your way to the Mississippi River or just as a fun day trip from Chicago.


A Rainbow of Gardens

Rockford has been dubbed “City of Gardens” because of its 4,000 hectares of parks and public gardens. Stroll Anderson Japanese Gardens, a five-hectare treasure featuring waterfalls, ponds, paths, quiet corners and 16th century sukiya-style structures, including a teahouse and guesthouse; visit on a Tuesday for live music in the evening. Anderson was named the highest-quality Japanese garden in North America by Sukiya Living Magazine. Explore 60 hectares of unusual trees, shrubs and perennials at Klehm Arboretum & Botanic Garden. Visit historical gardens reflecting those of the late 1800s at Midway Village Museum and Tinker Swiss Cottage Museum. Don’t miss the Nicholas Conservatory & Gardens overlooking the Rock River’s nature path; it’s the third largest conservatory in Illinois.

For outdoor thrills, soar through the air on a zip line tour experience at Zip Rockford. Go kayaking along the Rock River with Rocktown Adventures, or try wakeboarding at West Rock Wake Park. You can swim, bike, hike or kayak in Rock Cut State Park’s 1,251 hectares. If you’re a golfer, then Rockford is paradise. Thanks to the quantity and quality of courses available, this city can be counted among the best for golf; try the Sinnissippi or Elliott courses. Don’t forget the kids: Magic Waters, which is now a Six Flags Waterpark, is an exciting way to cool off.

Jane the T. rex is the undisputed star of Rockford’s Burpee Museum of Natural History. The science exhibits will intrigue both young and old. The Discovery Center Museum houses more than 250 hands-on arts and science exhibits. Art fans will love the Rockford Art Museum, Illinois’ largest art museum outside of Chicago, with over 1,500 exhibits. Don’t miss the Coronado Performing Arts Center; its opulent interior is painted with gilded Spanish castles, Italian villas, Chinese dragons and a starry sky for a ceiling. Mingle with the locals and enjoy a community performance at Starlight Theatre. Before you leave, stop at Frank Lloyd Wright’s Laurent House, which the acclaimed architect considered his “Little Gem.” Recently restored, this single-story Usonian home is a rare mid-century design.

Rockford was first called "Village of Midway" because it's midway between Chicago and Galena.

The Rockford Peaches women’s baseball team was founded in 1943 as part of the All-American Girls Professional Baseball League. The team became immortalized through the 1992 movie “A League of Their Own.”

Ask a Local About Madison, Wisconsin

Combining Culture and Fun on Route 66 in DuPage County

Fashion Outlets of Chicago in Illinois: Designer Brands Near the City

House on the Rock

Fun Stops and Photos Ops: The First Stretch of Route 66 in Illinois

Where to Shop on your Visit to Chicago, Illinois 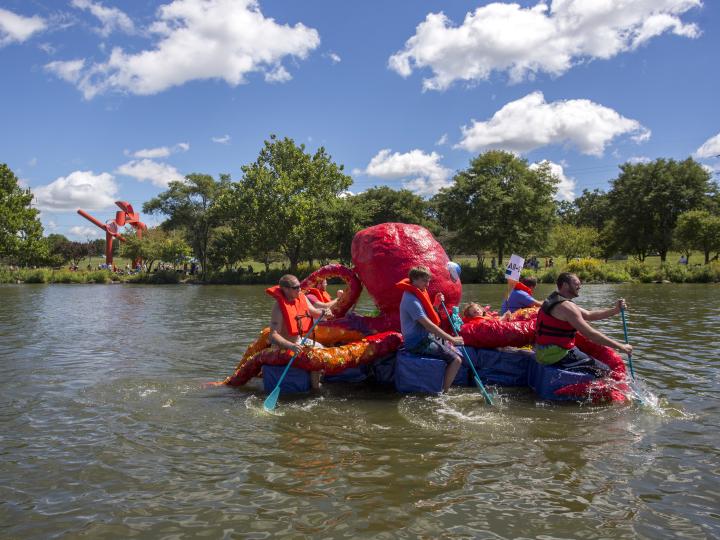 Rock River Anything That Floats Race