The Benedum Center for the Performing Arts, one of the Cultural District's nine world-class theaters

Urban kayaking on the Allegheny River, one of the three rivers that frame the city

Historic Point State Park, where the three rivers meet in the heart of the city

The Roberto Clemente Bridge, one of the city's three Sister Bridges

From sophisticated museums to professional sports, find plenty to explore in this historic river city

For the culture seeker, budding historian, sports enthusiast and urban adventurer, there’s no place quite like Pittsburgh, Pennsylvania. It’s one of the most historic and culture-rich cities in the USA with its foundation dating back to the mid-1700s. Pittsburgh is a destination that posts impressive numbers, too: 90 distinct neighborhoods, 40 craft breweries, 29 world-class colleges and universities, a 14-block Cultural District, nine James Beard semifinalist chefs in 2018 alone, four Carnegie Museums and four professional sports teams. To top it all off, Pittsburgh boasts one of the most Instagram-worthy skylines in the country.

American pop art icon Andy Warhol spent the first 20 years of his life in Pittsburgh, and The Andy Warhol Museum houses many of his most-beloved works in its seven-story space. See famous celebrity portraits, a selection of films and, of course, those colorful Campbell’s Soup Can prints. You can even try your hand at Warhol’s art techniques at The Factory artists’ workshops. Learn military history at Soldiers and Sailors Memorial Hall & Museum, discover Pittsburgh’s industrial past at the Rivers of Steel National Heritage Area and explore the dramatic Cathedral of Learning’s Nationality Rooms, reflecting heritages from around the world. The Cultural District’s nine performing arts venues and dozens of restaurants make for a perfect night on the town. Travelers with children will love family-friendly attractions, including the Carnegie Science Center, Children’s Museum of Pittsburgh, and the Pittsburgh Zoo and PPG Aquarium.

Sports and the Urban Outdoors

BBC Good Food named Pittsburgh a Top 10 Destination for Foodies for 2019. With dining options ranging from five-star restaurants to casual street food, it’s easy to see and taste why. Start with a few regional favorites – giant sandwiches stuffed with meat and french fries from Primanti Brothers, authentic Mexican tacos cooked and served street side, and pierogies from S&D Polish Deli. Satisfy your sweet tooth with a burnt almond torte, a Pittsburgh-native dessert that the Huffington Post once declared “The Greatest Cake America Has Ever Made.” Beer lovers, stop for a drink at East End Brewing, one of the city’s original craft breweries. These days, there are more than 30 local breweries to choose from – book a city brewery tour to sample some of the most popular pints.

The first emoticon – the smiley :-) – was created by a computer scientist at Pittsburgh’s Carnegie Mellon University in 1982. The city was also home to the world’s first gas station, movie theater and radio station.

At the Carnegie Museum of Natural History, you’ll find the skeleton of a T. rex that was the first to be found in the world.

With 446 bridges, Pittsburgh is often referred to as the “City of Bridges.”

5 Unforgettable Places to Practice Yoga in the USA

Up-beat and Down to Earth: Cleveland, Ohio

West Virginia: Travel Back in Time at Immersive Historic Sites

Ask a Local About West Virginia

Gettysburg, Pennsylvania: History and Culture for the Whole Family

A Taste of What’s New in Loudoun Wine Country

Ask a Local About Columbus, Ohio

Shenandoah National Park and Beyond: See the Blue Ridge Mountains

Pennsylvania’s Colorful Culture: A Tour of Art, Music and Gardens

Pennsylvania’s Great Outdoors: On the Road from Cities to Mountains 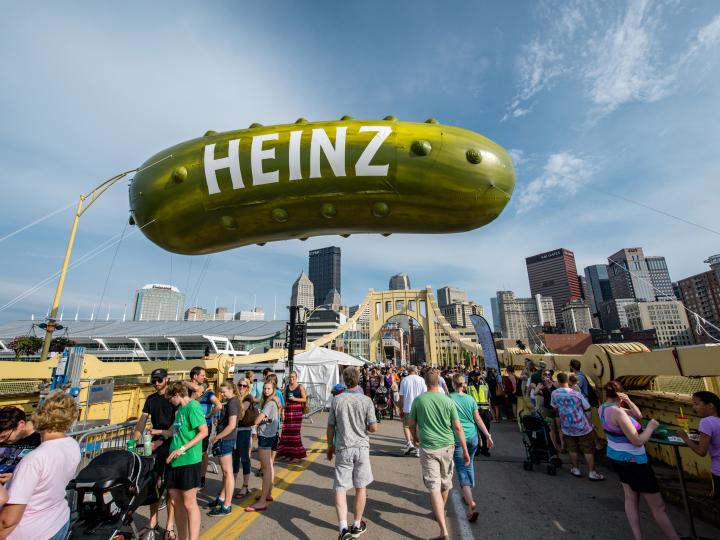