The “Cloud Gate” sculpture, commonly known as “The Bean,” in Millennium Park

The sprawling Museum Campus along the Lake Michigan shoreline

Buckingham Fountain, more than seven meters tall, in the center of Grant Park

Chicago: A global city with iconic and unexpected experiences

There it is: the famous Chicago skyline set against the sweeping shore of Lake Michigan. You’ll quickly appreciate this urban-meets-natural beauty when your feet hit the ground in the nation’s third-largest city. In the heart of the Midwest, Chicago boasts soaring skyscrapers, 77 colorful neighborhoods, 42 kilometers of lakefront with 26 beaches and 580 parks and green spaces. Equally impressive are the dining options – 7,300 restaurants and more than 65 craft breweries – outstanding arts and culture, urban recreation along the waterfront, world-famous events and a vibrant LGBTQ+ scene. Check out top things to do and places to go in Chicago during your next visit.

This cosmopolitan playground is bursting with things to do. Sightseeing options range from Chicago icons like Millennium Park’s sculptures, fountains, gardens and event spaces to awe-inspiring architecture by Frank Lloyd Wright, Frank Gehry, Daniel Burnham and Louis Sullivan. Get above it all on The Ledge, a glass platform on the Skydeck at Willis Tower, or the 360 Chicago Observation Deck on North Michigan Avenue, where the TILT experience leans you out 300 meters above Michigan Avenue.

Take in the beautiful cityscape with a stroll along the Chicago Riverwalk, where you can enjoy a waterside meal, sip a drink or set out on an architecture cruise on the Chicago River. Take the children to Lincoln Park Zoo, Navy Pier and Wrigley Field, three iconic and family-friendly attractions, or rent bikes and pedal along the 29-kilometer Lakefront Trail.

Tour the Neighborhoods in Chicago

Each of Chicago’s 77 neighborhoods offers a distinct experience. Ethnic and immigrant enclaves, such as Chinatown, Little Italy, Avondale, Andersonville, Pilsen and Lincoln Square, reflect the city’s multicultural influences, from German and Polish to Mexican and Chinese. Check out neighborhood bars and live music in Bucktown and Wicker Park. Uptown’s historic theaters, music halls and Art Deco buildings make it a cultural playground. The Loop is Chicago’s bustling downtown district, where you’ll find must-see landmarks and plentiful options for dining, shopping and nightlife.

Chicago is renowned for its cultural offerings with more than 60 museums and a dedicated Museum Campus, home to The Field Museum, Shedd Aquarium and Adler Planetarium. Don't miss the Art Institute of Chicago, containing 300,000 works in its permanent collection, and Museum of Science and Industry, the largest in the Western Hemisphere.

As the only U.S. city with five regional Tony Award-winning theaters – Goodman, Chicago Shakespeare, Lookingglass, Victory Gardens and Steppenwolf – Chicago’s theater scene takes center stage. You can catch shows at more than 200 venues in addition to performances from esteemed companies such as Joffrey Ballet, Lyric Opera and Chicago Symphony Orchestra.

Chicago’s culinary scene is filled with star chefs, ethnic eateries and award-winning fine dining, including 25 Michelin-starred eateries. Just as famous are the casual classics like Chicago-style hot dogs and deep-dish pizza. In fact, Bon Appetit named Chicago the 2017 Restaurant City of the Year. Cap off your meals with visits to specialty cocktail bars, historic pubs and more than 65 craft breweries.

Shopping is an equally big deal here. Don’t miss Michigan Avenue’s 13-block stretch, The Magnificent Mile, with more than 460 stores. Explore major department stores, luxury boutiques and the can't-miss, multilevel Water Tower Place mall. If it’s music you’ve come for, you’ll find everything from live music venues to outdoor events like Millennium Park concerts, Lollapalooza and the Chicago Blues and Jazz Festivals. For nightlife, head to the many cocktail lounges, sports bars or dance clubs that dot the entertainment landscape. Opt for tickets to a legendary comedy club, The Second City, where comedians such as Tina Fey, Steve Carell and Stephen Colbert got their start.

We inspire tourists to visit and work with the travel industry to promote this destination worldwide.
For general inquiries and travel information:
Send email
Phone:
312-567-8510
Web:
https://www.choosechicago.com/travel-professionals/

The world's first skyscraper was built in Chicago in 1885.

Historic Route 66 begins in Chicago at Grant Park on Adams Street in front of the Art Institute of Chicago.

Soul, Pride and a Whole Lot of Blues in Chicago, Illinois

Ask a Local About Chicago, Illinois

Chicago, Illinois: Holiday Fun and Fashion for the Whole Family

Blue Man Group in Chicago, Illinois: Get Loud at This Festive Show

7 Festivals to Boogie to the Blues

Chicago, Illinois: Shopping and Entertainment in the City

Chicago Attractions: 4 Tours to Take in the Iconic Illinois City

3 Days in Chicago, Illinois: Must-See Places on Your First Visit

A Day in the Life of a Chicago, Illinois Native

Where to Shop on your Visit to Chicago, Illinois

The Art Institute of Chicago in Illinois: Artistic Discoveries Await 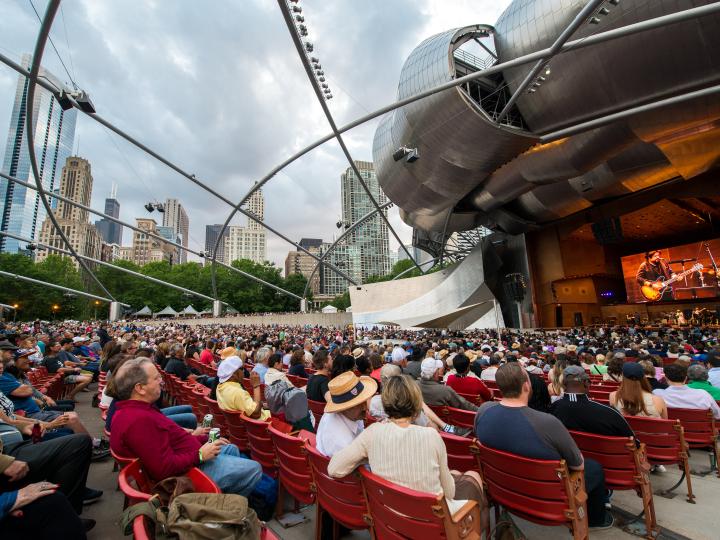