A peaceful trip down the Cahaba River

Enjoying the day at Railroad Park

An installation at the Birmingham Civil Rights Institute

A gallery of shiny bikes at Barber Motorsports Museum

Exploring restaurants and nightlife in the Uptown neighborhood

Having a blast at McWane Science Center

Playing a round on a Robert Trent Jones Golf Trail course

Something locals hear time and again from first-time visitors to Birmingham is that they never realized the beauty of the area. With the foothills of the Appalachians as a dramatic backdrop, the city is laid out on a series of lush rolling hills with woodland-covered neighborhoods just minutes from downtown. It’s the city’s diversity, though, that is its greatest strength. Charm and entertainment bring people back time and again to enjoy Birmingham.

Birmingham’s prominent role in the USA’s Civil Rights Movement is commemorated at the Birmingham Civil Rights Institute, where exhibits explore the movement’s rise. Children’s activities, traveling exhibits and events round out this dynamic museum. In the Civil Rights District, recently named a National Monument, visit important historical sites like the 16th Street Baptist Church and Kelly Ingram Park. Nearby, Sloss Furnaces, an old ironworks and now National Historic Landmark, offers a look at the city’s industrial past. Learn about the furnace plant’s 90-year history, marveling at the pipes and smokestacks as well as the modern metal artworks on display. Iron made such a mark on this city that Vulcan Museum & Park acknowledges it with a towering statue of Vulcan, Roman god of fire and forge. At 17 meters high, Vulcan is the world’s largest cast iron statue and presides over both a park and an interactive museum dedicated to telling Birmingham’s story.

Think of downtown’s Railroad Park as a bridge between the city’s industrial roots and its fun-loving, outdoorsy side. This nearly eight-hectare greenspace features a Rail Trail, scenic wetlands, open lawn and great views of the city. It’s easy to toss a ball around, or to quickly get to Regions Field to catch a Birmingham Barons minor league baseball game. If you’re willing to go just a bit outside the city, the Cahaba River offers nature-lovers much to do. The river is well-known for its prime fishing, and as the longest free-flowing river in the state, one canoe or kayak trip can yield dazzling results: Along with sightings of a range of plants, birds and other wildlife, rare white lilies bloom on the banks in summer. Golfers will relish the temperate climate and the opportunity to play two challenging courses, Oxmoor Valley and Ross Bridge, along Alabama’s Robert Trent Jones Golf Trail.

That this Southern city has its own cosmopolitan personality is another eye-opener to visitors. It’s hip without being pretentious. It’s cool without trying too hard. Should you have Birmingham pigeonholed as serving only barbecue and fried pies, just remember that the city is home to several James Beard Foundation Award winners and nominees. Its reputation is just as solid when it comes to art, with dozens of galleries clustered near the downtown area and more popping up all the time. The Birmingham Museum of Art’s collections feature 26,000 ancient-to-modern works, as well as an ever-changing roster of exhibitions and events, for those who want a dose of seriously high culture. In the Theater District, the Alabama Theatre, a 1927 movie palace, offers films, shows, concerts and other performances in a gorgeous space. The same goes for Lyric Theatre, directly across the street, where opera, symphony and ballet performances take center stage. 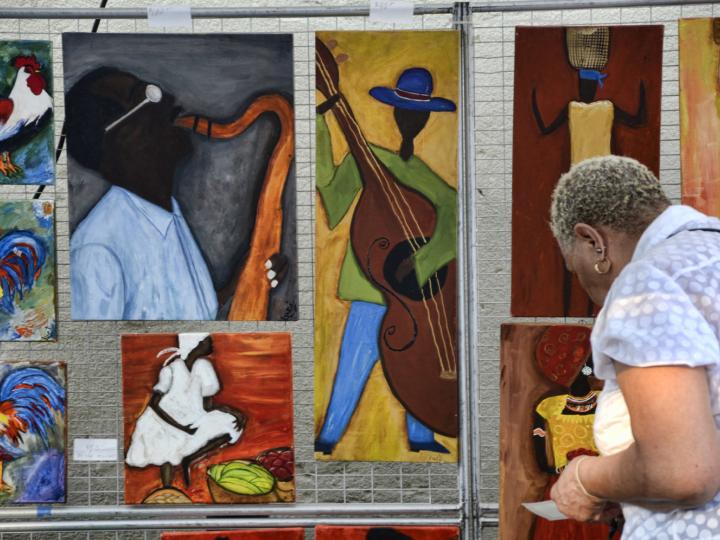 The Birmingham Civil Rights District was designated a National Monument in 2017.

Vulcan, the mythical god of metalworking, is the largest cast iron statue in the world and won first place in the 1904 World’s Fair.

Dinner, Drinks and Music in Birmingham, Alabama: A Day-to-Night Guide

Dance to Alabama’s Own Rhythm

Adventures in the Great Outdoors

As Seen on Film in Huntsville, Alabama: Places in Bollywood’s ‘Zero’

Bite Into Barbecue at One of These 7 Great Festivals