Sunrise over the beach at Amelia Island State Park

Enjoying some family time on the beach at Seaside Park

Though not exactly a secret – it was named one of the top islands in the world by Condé Nast readers – Amelia Island is certainly one of Florida’s lesser-mentioned holiday destinations. Surprising, because this island getaway checks off just about everything on a traveler’s wish list: beaches, history, outdoor recreation, shopping, dining and accommodations fit for families and celebrities alike. And as far as numbers go, Amelia Island racks up 21 kilometers of shoreline, 99 scenic holes of golf, a 50-block historic district, more than 100 outstanding restaurants and a calendar full of festivals.

Beaches for Families, History and Nature

The island’s quartz-sand beaches are picture-perfect; meticulously enforced regulations keep them that way. Families tend to congregate at Main Beach, which also offers handicap access and beach wheelchairs; or Fernandina Beach, just steps away from the historic district. Peter’s Point is popular with cyclists looking to access the 10-kilometer Amelia Island Trail. Collect shark’s teeth and shells at Fort Clinch or see the protected dunes on historic American Beach. At the southern end of the island, you can go horseback riding on the beach at Amelia Island State Park. Looking to escape from it all? Try Little Talbot Island State Park. It remains blissfully undeveloped and teems with wildlife and undisturbed natural habitats.

Amelia Island is one of the state’s most historic locations, claiming many of Florida’s “oldest”: oldest bar, oldest inn, oldest lighthouse and oldest newspaper. The cultural influences of the eight different flags that have flown here since 1562 have seeped into every brick and grain of sand. The Amelia Island Museum of History, housed in the old county jail, offers a comprehensive historical overview, from Timucuan Native Americans to pirates, European settlers, Civil War soldiers and the Victorian elites. From here, take a horse-drawn carriage or walking tour of Fernandina Beach’s 50-block historic district. Watch a living-history demonstration and explore barracks at Fort Clinch State Park. American Beach is the first stop on the Florida Black Heritage Trail; visit the American Beach Museum to learn about this seaside haven for African Americans during the Jim Crow era.

Eat, Drink and Be Merry in Amelia Island

With more than 100 independent restaurants, Amelia Island has your appetite covered. Notable favorites include Southern comfort food at 29 South, wild-caught seafood at Timoti’s Seafood Shak, Spanish and Portuguese specialties at España Restaurant and ultra-high-end dining at Salt, winner of the AAA Five-Diamond Award. You can sample these and many others at discounted rates during Restaurant Week in January. No trip to Amelia Island would be complete without a drink at The Palace Saloon, the oldest bar in Florida. Afterward, browse the historic streets lined with antique shops, boutiques, galleries and pubs.

We inspire tourists to visit and work with the travel industry to promote this destination worldwide.
For general inquiries and travel information:
Send email
Phone:
904-277-0717
Web:
http://www.ameliaisland.com

Amelia Island is the only place in the USA that has been under the rule of eight different flags: French, Spanish, British, Patriots, Green Cross, Mexican Revolutionary, Confederacy and USA.

Fort Clinch State Park served as a base for both Confederate and Union soldiers during the U.S. Civil War.

Amelia Island is the birthplace of the USA’s modern shrimping industry, which is celebrated each May during the annual Isle of Eight Flags Shrimp Festival.

The Suwannee River Valley: Discovering Florida’s “Other Side”

Culture on the Coast on Hilton Head Island

Crystal River, Florida: Guide to Manatees, Scalloping and the Outdoors

Gatorland: Wildlife Adventures in the Heart of Orlando 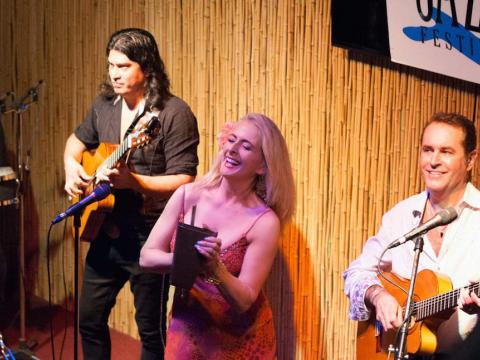