The historic Delaware & Hudson building downtown, an architectural icon of the city

The New York State Museum, where visitors can trace the state’s history

Tulips in bloom in Washington Park

The illuminated marquee of the historic Palace Theatre

History brought to life in Albany, a city ripe for off-the-beaten-path exploration

New York State’s capital city is a perfect destination for history lovers, with its many significant sites and museums. Fans of the hit Broadway musical “Hamilton” can see the story come to life at historical stops around the city. Albany is also a prime place for those seeking outdoor adventure, with parks and nature preserves to explore. Don’t miss out on a wide variety of memorable dining experiences, as well as a thriving craft beverage scene.

Head to the New York State Museum to learn about the state’s natural history, as well as its significant historic events. The Albany Institute of History and Art, which was founded in 1791, is one of the country’s oldest museums. It features many artifacts and interpretive exhibits detailing the history of Albany and the Upper Hudson Valley region. Join a free guided tour of the New York State Capitol building to learn about its Romanesque Revival and neo-Renaissance architecture. Take a self-guided tour of sites significant to U.S. Founding Father Alexander Hamilton (of “Hamilton” musical fame), with stops at the Ten Broeck Mansion (built for a close friend of Hamilton’s father-in-law), the Fort Orange Club (a former boarding house where Aaron Burr is believed to have stayed) and Schuyler Mansion State Historic Site (where Hamilton and Elizabeth Schuyler were married in 1780).

Albany’s John Boyd Thacher State Park, which sits along one of the world’s richest fossil-bearing formations, offers stunning views of the area’s valleys as well as the Adirondack and Green Mountains. The park offers guided tours of its Indian Ladder Trail, known for its dramatic cliffs and waterfall. The Albany Pine Bush Preserve is a massive natural area known for its significant geological and cultural history. The preserve is home to rare plants and animals, including the endangered Karner Blue Butterfly. Hop aboard the Dutch Apple II for a Hudson River cruise to marvel at the area’s scenery (and fall colors in autumn) while learning about the city’s connection to the waterway. Albany also offers a bike-share program, CDPHP Cycle!, which allows visitors to pedal around the city’s top attractions.

Begin a culinary adventure with the Historic Downtown Albany Food Tour, offering a guided walking tour for tastes of area restaurants’ dishes and drinks. Get a side of history with your meal at the historic Quackenbush House, Albany’s second-oldest building. Built in the 1730s, the building is now home to the Olde English Pub. Follow Albany’s Capital Craft Beverage Trail to sample small-batch sips from dozens of breweries, cideries and distilleries.

Founded in 1791, the Albany Institute of History & Art is one of the oldest museums in the USA.

Albany’s Warehouse District is home to the largest replica sculpture of “Nipper,” the iconic canine mascot of the Radio Corporation of America (RCA).

Albany Pine Bush Preserve is one of the last remaining inland pine barrens in the world. It’s home to the endangered Karner blue butterfly.

New York State: Home to Some of the USA's Famous Foods

Vermont: Exploring the Beauty of the Shires

The Berkshires: Vacation Escape for All Seasons

Catskill Mountains of New York: Mountain Adventures for Everyone

The Catskills in Upstate New York: Fishing and Kayaking Adventures

The Catskills in New York State: Mountain Activities for All Seasons

6 Lakes You Must Visit in the USA 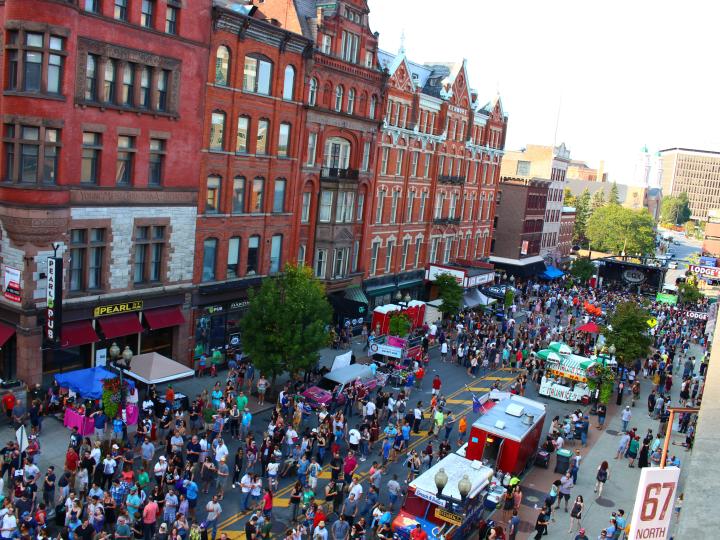 Capital Holiday Lights in the Park